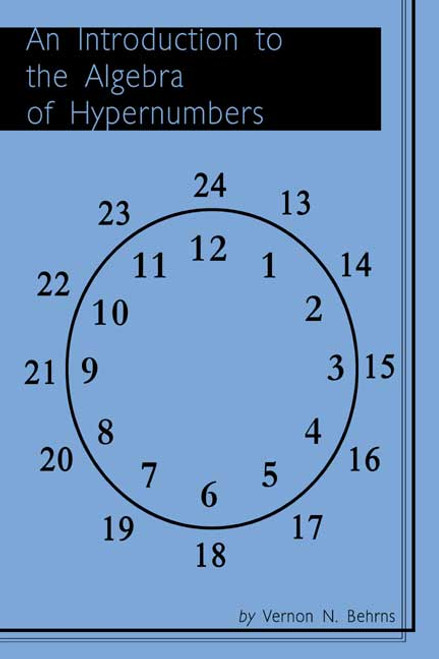 by Vernon N. Behrns Vernon N. Behrns expresses the possibility to extend Hamilton quaternions for dimensions n = 2p. The only problem with this is the devising of a suitable product table. His introduction describes the concept of an imaginary number, known as i, which is hidden in the second degree equation x2 + 1= 0. The solution is x = 1, and there is no real number 1. Therefore, the number space was extended by denoting 1 = i. i, becomes known as an imaginary number. The imaginary idea is reinforced by the graph of the function y + x2 + 1 = 0 since this parabola does not cross the x axis. Still, simple quadratic equations such as x2 + 5x + 7 = 0 have no solution. But if the real numbers were added to the so-called pure imaginaries to form the complex field, a + bi, a and b real, this complex number field then provided solutions for quadratic equations in general. This book is an attempt at broadening the concept of hypernumbers and extending their dimension. Behrns describes the algebra of hypernumbers, which consists of hyper complex hyper real numbers. ABOUT THE AUTHOR A native of New York, Vernon N. Behrns now lives in Lady Lake, Florida, and has two daughters. He studied and taught mathematics at the University of Buffalo and also earned his Ph.D. in mathematics. Although Mr. Behrns has not previously published books or materials on his own, he has written for others who in turn have published and named him as an author. Those works include:
-Least Squares Fitting of Exponential Functions; CNA Research Contribution No. 149, March 1970.
-Co-author of A Procedure for the Evaluation of Proposals; Marine Corps Development Center, Quantico, VA, August 1971
-A Methodology for Selecting Small-Arms Rounds to Meet Military Requirements; CNA CRC 307, September 1976 (2007, paperback, 34 pages)
×