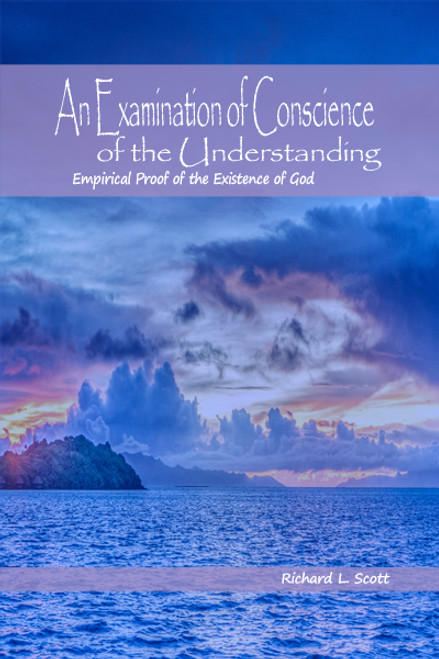 An Examination of Conscience of the Understanding: Empirical Proof of the Existence of God
by Richard L. Scott

Seeking his own utmost depth of comprehensive understanding, the author sets out to prove empirically that God exists. The seed of proof is the Birth Paradox, its florescence a faith grounded in his spirituality disposed soul: As empirically real as his conscious self, as mathematically certain as the probability laws of genetic science, as necessary as that the universe requires a creator for its rational possibility, as immanently intuitive as the Divine Allegory he mirrors.

The Birth Paradox is the contingency of personal conscious existence on the body. Is there any scientific or commonsense belief as certain of itself? And yet, as a practical proposition, it is an utterly impossible conjunction! Personal consciousness is necessary specific to its own experience, a subtly profound tautology! How is it, then, that ones necessary being can be dependent on a chance body?

Richard L. Scott was born and raised in the small village of Lewisville (Monroe County), Ohio, the third of twelve children. He attended Ohio State University in Columbus, earning a B.S. in Education in 1958 and an M.A. in School Guidance in 1972. Over the years, he pursued very extensive graduate studies. After graduation in 1958 he coached high school sports briefly, then was drafted into the U.S. Army, serving in Germany in 1960-61.

Notably, he served as Student Services Supervisor in Project Ohio Newgate, a pilot program in higher education for the Ohio adult penal system administered by the Ohio Board of Regents. His most gratifying teaching experience was of a high school senior psychology class at Berkley, Michigan High School.

He ultimately became employed by the Columbus Public Schools in various teaching, counseling, and quasi-administrative roles until retirement.