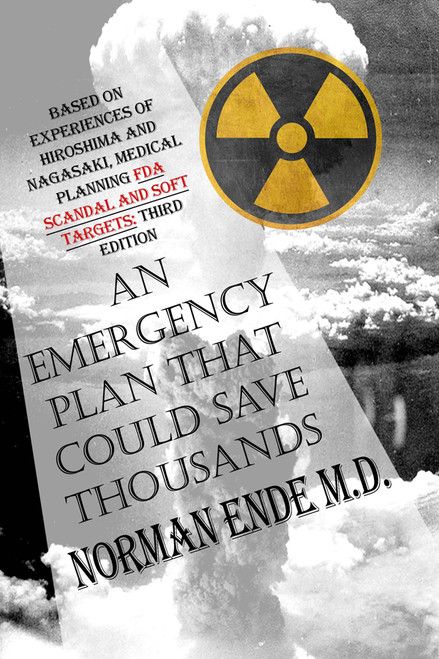 The explosion of the atom bomb at Hiroshima and Nagasaki had a great significance to anyone in the military, nationally and worldwide. It not only ended the war; it directly affected those in uniform. When the bombs dropped, Norman Ende was a naval cadet in medical school, and his brother, Dr. Milton Ende, was a medical officer who had been ordered to the Pacific where they expected heavy casualties (1 million). The Ende brothers reported the first transplant of human umbilical cord blood to a patient with Leukemia in 1972. Since then, their research into cord blood transfusion has shown to significantly improve not only victims of irradiation but numerous diseases.

In An Emergency Plan, Dr. Ende describes an essential plan, based on his research, to prepare to treat Americans in the event of a nuclear terrorist attack. But since a sudden change in FDA regulation in 2003, clinical trials involving human cord blood in the U.S. have been effectively stalled. As Dr. Ende outlines, not only is treatment research for disease hampered, but the U.S. remains unprepared in the event of nuclear attack. Currently no plan exists for mass casualties (10,000-100,000+) that can be activated.

Dr. Norman Ende was born in Petersburg, Virginia. He joined the Navy program (V7-V12) in 1942, serving his first tour of duty at the Naval Hospital at the Marine base in Quantico, Virginia, before earning his medical degree at the Medical College of Virginia in Richmond. He was called back to active duty for the Korean War and remained in the service as a reserve medical officer for close to 44 years, becoming one of the longest-serving reserve medical officers in the Navy.

As a pathologist, Dr. Ende has published over a hundred medical articles, six of which may have made a significant impact on the course of medicine. Since 1992 he has devoted his research to creating a plan for the treatment of mass casualties from a nuclear explosion and the use of unmodified umbilical cord blood for the treatment of multiple clinical diseases (ALS, Types I and II Diabetes, Huntingdon’s Disease, Alzheimer’s Disease, cancer of the prostate and others) as noted in this book.

Breaking Into Prison to Save Lives at Rioting Ohio Penitentiary - eBook