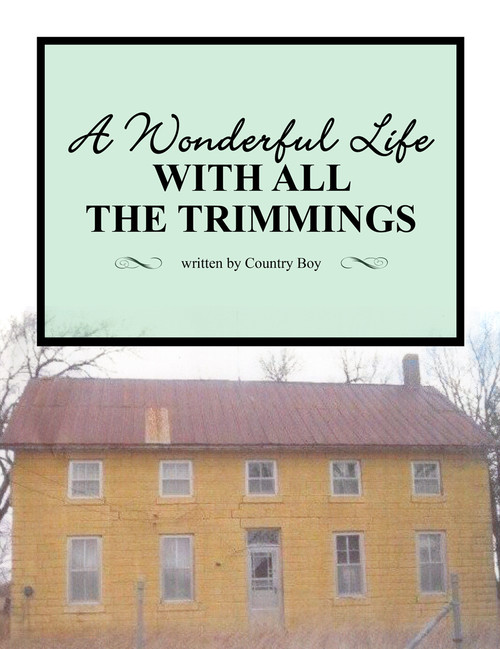 A Wonderful Life with All the Trimmings
by Country Boy

The story of an orphan boy who came from a Huckleberry-type childhood, A Wonderful Life with All the Trimmings recounts Country Boys journey from these humble beginnings to a successful adulthood, helped along the way by many others. Growing up in Kansas and losing his parents at a young age, he had a difficult start, but he realized his calling in the Navy as an adolescent. He began his naval life, never expecting it to be his career, when he was assigned at NAF, Weeksville, NC. He progressed through the rankings, making his way onto the most sophisticated aircraft in its day, the E2, and ships like the USS Forrestal and the USS Independence before retiring into careers in civilian life.

The author intertwines the stories of his professional careers with stories of his personal life, giving us insight into his development from a young Kansas boy into a military officer. Full of entertaining anecdotes, he writes with sincerity and often blatant honesty, never afraid to reveal himself entirely to his readers. Reading his adventures from the Great Depression era to the twenty-first century gives us a glimpse into the life of a man whose heart will always remain in his hometown of Hanover. Even as his bids his readers adieu, the author is sure to note that this is only the beginning; he hopes there are still many adventures to come.

Eager to share his story with his readers, Country Boy was inspired to write this autobiography by lifes experiences and the people [he] met all over the world. He was born in Kansas and although he traveled to various places during his time in the Navy, he has remained a resident of his native state for seventy-seven years. He has been married to Ruth Meyn for over thirty-two years.

An active member in many organizations, Country Boy is involved in the American Legion, the VFW, the Fleet Reserve Association, the Naval Airship Association, and the USS Forrestal Association. In addition to writing, his interests include hunting, fishing, cards, adventure, and family activities. This is his first book; his poems can be found in the International Library of Poetry.

A Woman in Black