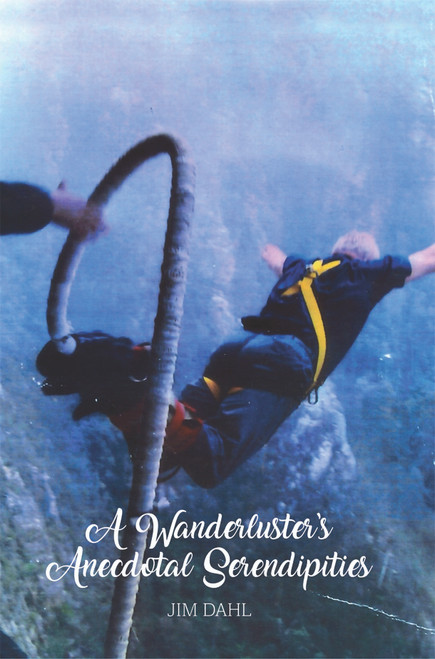 When Jim Dahl sold their home due to his darling Maureen’s untimely passing, an entirely new world effloresced whence gone wanderlusting on annual odysseys, lo bolstered with her loving benedictions from afar, consequently no longer able to create miniature mosaic tile portraits nor create woodworking projects in his backyard homemade shop. Not having finished high school, he missed the romance of classical literature, which at this juncture caused him to delve into the various classics. This perked his desire to become a poor man’s version of an intellectual, which in turn sparked his desire to write poetry, creating A Wanderluster’s Anecdotal Serendipities.

Jim Dahl was born in 1934 in Devils Lake, North Dakota. After the death of his father in 1941, migrated with mother and brother to Seattle. Ages 13-18 toiled swing shift setting pins at the bowling alley. He served four years U.S.A.F. posted in Tripoli, Frankfurt, Paris, and London, and during his final duty post, the ultimate quintessence serendipity of serendipities, he met his beloved Maureen, whom boldly declared, “promised my dad, first a gold band” ushering six months glorious chaste courtship, whence united. Thus began a 25-year love affair union until her passing, followed by 38 years of contended chaste widowerhooding. Dahl labored 30 years with Western Union, never missing one day assigned to work. Over the years, Dahl has grown to be a passionate writer, having written over 1700 poems and a smattering of essays. To date, many times over, he has visited 445 cities, towns, villages, safari lodges, 87 countries and counting, having had a beer on all seven, considers wanderlusting his elan vital.

Who Are You Talking To?

Conversations in the Lost Art of Poetry, Volume I: Violent Virgin

Shades of Love: Poetry of Life and Love Lost and Found (HC)

Blissful Tales of The Heart