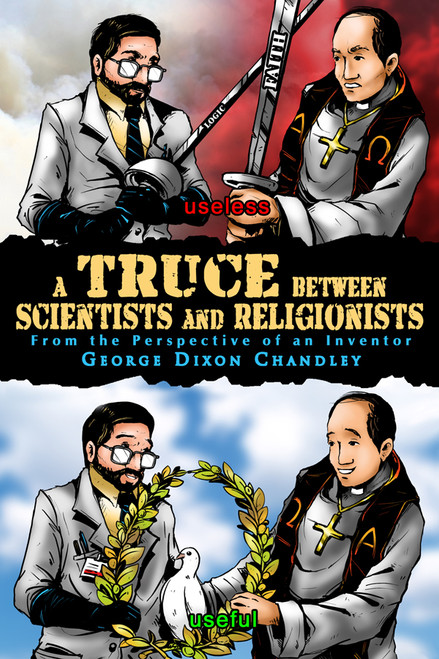 A Truce between Scientists and Religionists: From the Perspective of an Inventor
by George Dixon Chandley

Soon after Charles Darwin published his book The Origin of Species in 1859, religious people(religionists) and scientists became embroiled in a controversy, still continuing, about how life began. In a carefully constructed, easy to read analysis of the origin of our universe and how humans and their unique brains evolved, the author shows how science and religion both are the result of basic human instincts from prehistoric times. An individual, because of his or her specific genes, brain construction, brain chemistry, mutations, cultural effects, and environment is destined to become more scientific or more religious. So, it is not reasonable to call a person more human or better or right, just because he favors one or the other. For reasons explained, both are essential.

Additional research and analysis of modern biology and human reproduction is used to show why humans vary so widely in thought processes as well as their interests and beliefs in science and religion. Without question, all of this is strongly affected by instincts which date back 30,000 years. This book shows why such instincts slowly developed over millions of years and were useful to the ancients. The cultural advance in the last 150 years has changed life so fast that one can truly say that a baby born with those instincts is like a new being from an alien planet. For the improvement of the complex world we now have, the alien must be improved by education.

Scientists and religionists are the best equipped to guide this education and should work together to achieve desirable cultural goals. First, each should stop trying to prove the other wrong or inferior and at least call a truce. If possible, they should pick some common goal and work together for the betterment of all.

George Dixon Chandley was born and raised in Lake Wales, Florida. He retired in 2000, after an MIT education and a world wide, 47 year career in automotive and aerospace development and manufacturing, in which he authored 44 US Patents. Married, with five children, he and his wife moved back to and are living in Lake Wales.