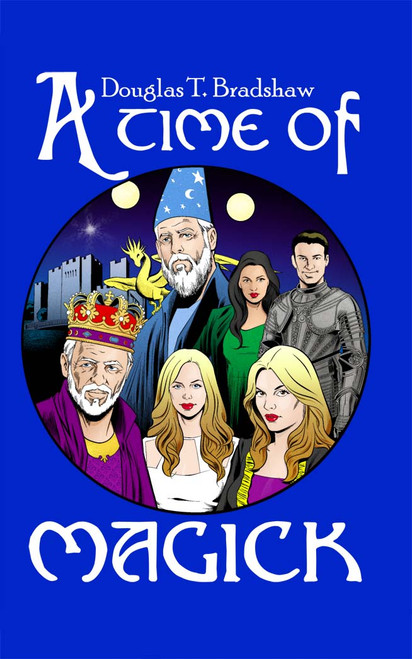 Thaddeus Brimstone is one of the greatest wizards of the age. His work with potions is surpassed only by his innovations in the oft-neglected field of metamagic. He has conquered every challenge he has ever faced, and not even time can do any lasting harm to him thanks to his life-extending elixirs. The one thing that Thaddeus does not have, however, is love—the love of a woman, of children, of close friends and family. Little does he know, however, that the path to finding love might just lie in the pages of a book about a war-torn land where magick has all but disappeared.

This storybook tells the tale of an ill-fated king and queen. Since Thaddeus’s youth, their story has been set—death and destruction at the hands of an invading army. When Thaddeus opens a portal to the world of the story and steps through, his interventions have the potential to reshape the lives of everyone from the most powerful kings and queens to the lowliest servants.

In A Time of Magick, Douglas T. Bradshaw showcases his passion for storytelling, a craft which he has honed by participating in fantasy role-playing for over 25 years. He also draws influence from real-world Wiccan practices and beliefs, and he hopes that, through his writing, he can bring this type of storytelling to a wider audience.

The Illusions of Billie Washington

The Messenger: Book One of the Unofficial Case Files