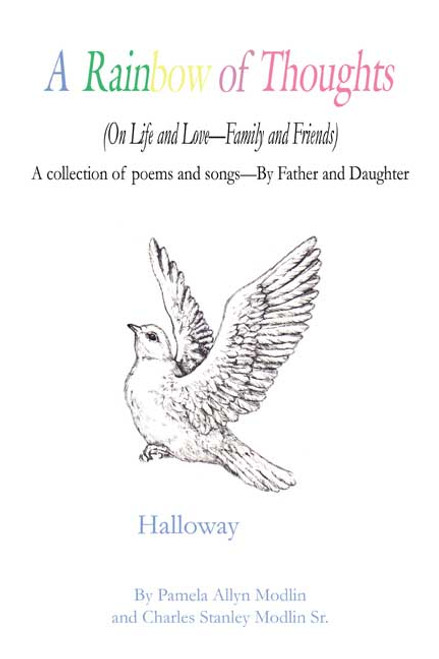 by Pamela Allyn Modlin and Charles Stanley Modlin Sr. Like each rainbow is beautiful and different, our lives are filled with various experiences that make our world bright and new. From the love of a husband and wife to the innocence of a newborn child, from the pain of lifes loneliness to the strength found in Gods Light, Pamela Allyn Modlin and her father, Charles, give us A Rainbow of Thoughts (On Life and Love Family and Friends) through their thought-filled poetry to open our minds and hearts to the beauty of the world around us. ABOUT THE AUTHOR A magna cum laude graduate of Ball State University with a bachelors degree in social work, Pamela Allyn Modlins poetic accomplishments include having numerous poems published in several different volumes of poetry by the International Library of Poetry (poetry.com). Managing Editor Howard Ely has also given her the honor of being in The Best Poems and Poets of 2003, featuring 200 of the best poets of that year. She has also been invited to be in The Best Poems of Poets of 2004. Convention Chairperson Steve Michaels and the editorial staff of the International Society of Poets (ISP) have invited her to be a guest poet at its February 2005 convention at Walt Disney World Resort in Orlando, Florida, hosted by longtime ISP supporter actress/singer Florence Henderson. Past panel poets have included Pulitzer Prize winning poet W.D. Snodgrass. Her poem will be broadcast on national radio and read to 2,000 poets and guests. Her father Charles Modlin Sr. is a runner a Gold Medallist currently one of the most celebrated Hoosier Senior Olympians, earning local and national fame. In 1994, he had the honor of being the torchbearer at the Senior Games in Evansville. His motto is Isaiah 40:31 But they that wait upon the Lord shall renew their strength; they shall run, and not be weary, and they shall walk, and not faint (KJV). On June 1, 2003, at the age of seventy-eight, he received his high school diploma fifty-nine years after leaving school to serve his country in the navy in World War II. He is a two-time cancer survivor. A social activist, he often expresses his opinion in editorials; Senator Richard Lugars office and news channel 13 WTHR are two of the organizations who have interviewed him on his lifetime accomplishments. He is also a featured Poetry.com poet. Pamela and her father live in New Castle, Indiana, where you can find his name on a local plaque welcoming visitors and guests to the City of Roses, an honor bestowed by former mayor Sherman Boles. (2006, saddlewire, 24 pages)
×