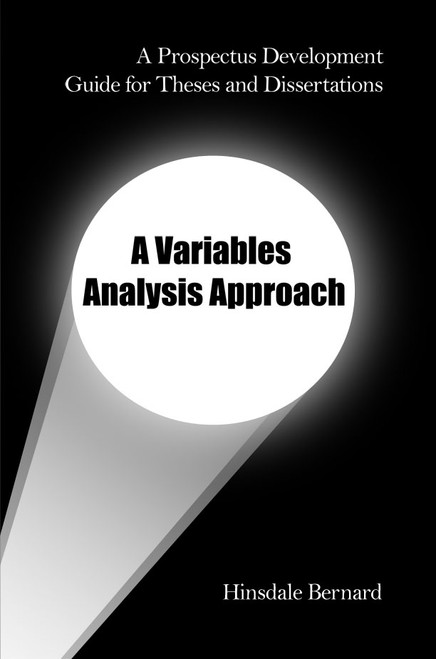 This book will be a game changer for the beginning researcher who is intimidated by the misconception that research and statistics are synonymous. This guide is written with as little statistical jargon as possible, so that the reader will be drawn into the research process vicariously.

Hinsdale Bernard wrote this book to encourage budding researchers to claim ownership of the process from its inception. Too often, students stare at a blank sheet of paper for ages before attempting to break the ice. With the variables analysis approach, there is room for trial and error that will make the research process more realistic. Bernard’s strongest focus is on the organization that undergirds the process that helps the researcher keep things in their right perspective. Above all, this system is associated with an almost 100 % success rate of Bernard’s own thesis/dissertation advisees.

Hinsdale Bernard has a passion for organization that may be a reflection of his upbringing in a family of 13 siblings in the twin island nation of Trinidad and Tribago. He also believes that this quality undergirds the two major research interests that have dominated his life for over three decades: the conceptualization of his diligence and expectancy theory, the subject of his dissertation and subsequent research; and the development of a three-dimensional periodic table of the elements for which he received a United States patent in 2003, and which also forms the basis of research and development.

Bernard received his bachelor’s degree in chemistry with industrial chemistry and a diploma in education from The University of the West Indies, Trinidad in 1972 and 1979, respectively. He received his master’s degree in education from the University of the Virgin Islands in 1984. He earned a Ph.D. in educational administration and supervision with a cognate in research and statistics from Andrews University in 1991. He is a member of the American Educational Research Association (AERA), the American Chemical Society (ACS), and the National Science Teaching Association (NSTA) and made exhibits at the latter two international organizations.

Bernard is married to Barbara, a retired elementary school teacher. They have two grown children, Ishara and Roald. Roald and his wife Hamdellia have made them excited grandparents of Roald II, Rielley, Roalia, Raiden, and Roagen. Bernard and his family migrated to the United States via the U.S. Virgin Islands in late 1979. His hobbies include building things around the house, gardening, and listening to religious music and programs. He enjoys soccer and cricket.

A Prospectus Development Guide for Theses and Dissertations - eBook

A Single Parent's Guide to Enjoying the Holidays