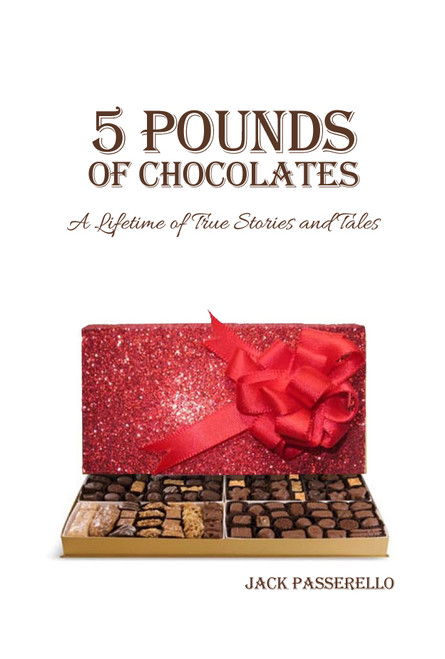 5 Pounds of Chocolates: A Lifetime of True Stories and Tales
by Jack Passerello

This book of short stories, tales, and lifelong memories marks the journey of a typical young American boy. Born during the Great Depression, he witnessed the turmoil of World War Two, saw the rebirth of Americas innocence as a teenager in that greatest of all decades (the 1950s), built a life of friends and family, and lived the great American Dream from bustling New York to beautiful California.

These mostly true stories are a chronicle of the life of not only the writer but of millions of Americans who have lived and loved and struggled and succeeded in this great country in the twentieth century.

Jack Passerello was raised in Manville, New Jersey, a small town on the Raritan River, where country met city and Polish, Italians, Russians, Africans, and the working class mixed in an unusual alliance for their time.

Hunting, fishing, trapping, marbles, baseball, basketball, and all of the sports and diversions of the kids before television were Jacks life that kept him and his friends and family ignorant to the electronic world to come of computers and Smartphones, Atari, and video games.

Then as a stroke of luck, Jack became an electric engineering draftsman, then designer of electric gear, then senior designer of computers for Hughes Aircraft in California, and the designer on the first computer in the world using a computer chip. Jack and his wife, Arline, started a plant nursery (Bluebell Nursery) in 1958 and still grow plants at their nursery there. They have grown almost every standard landscape plant, bush, tree, and palm that grows here in California.

Blessed with three children, nine granddaughters, two grandsons, and now five great-grandchildren, Jack and Arline keep as busy as ever with kids, bugs, and palm trees.