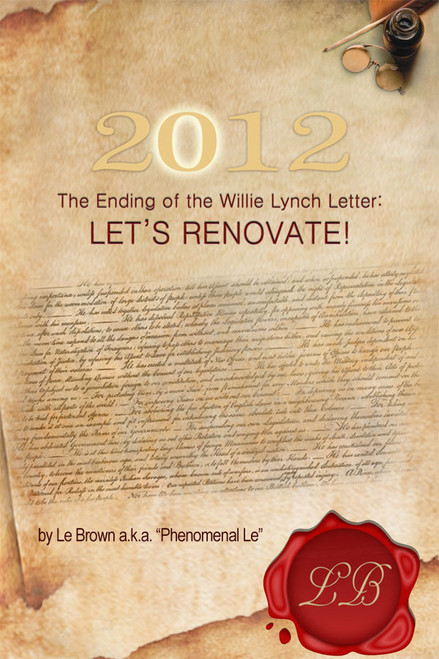 2012 The Ending of the Willie Lynch Letter Let's Renovate! Le Brown a.k.a. Phenomenal Le I wrote this piece to enlighten the minds of people in the world, especially blacks/African-Americans, about the negative psychological effects of the Willie Lynch Letter. This malicious labyrinth has impacted many lives, causing ignorance, broken homes, disrespectfulness, and poor health throughout the nation. Im concentrating more on aiding blacks/African-Americans because this ethnic group statistically leads America in negative aspects of life, such as heart disease, poverty, broken homes, incarcerations, lack of education, etc.and the fact that this system was directed toward African-Americans. Although all cultures and nationalities suffer from such downfalls because of such a melting pot society we live in, any man, woman, or child is capable of falling victim to Lynchs negative behavioral application. Mankind, as a whole, needs an improvement. About the Author Le Brown a.k.a. Phenomenal Le was born and raised in Florence, South Carolina. He currently lives in Charlotte, North Carolina.

The Book of Willie

Let There Be Light